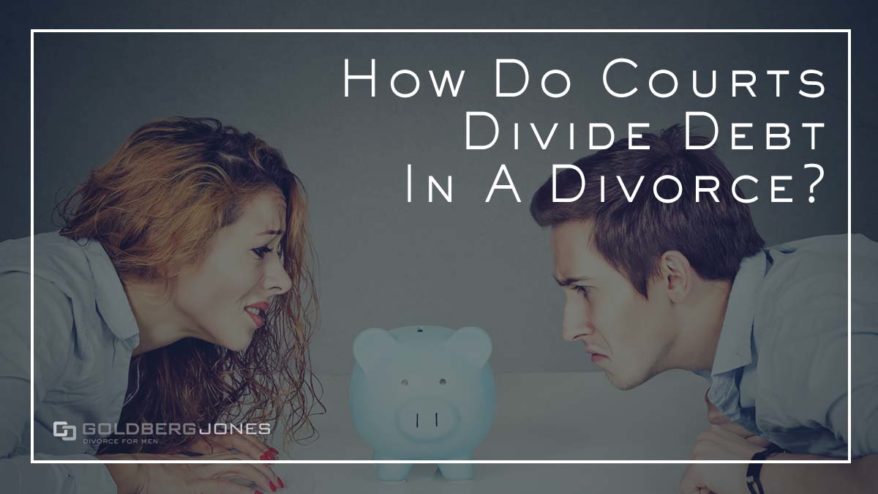 It’s an unpleasant fact of life, but many of us have racked up a significant amount of debt. We’ve got student loans, mortgages, car payments, credit card bills, and more places we owe money. We all know finances play a big part in ending a union, but how do courts treat debt in divorce?

When you marry, you amass debt for two. Even more, if you have kids.

The division of property forms a significant part of the process of dissolving a marriage. So, too, does splitting up remaining financial obligations. People focus so much on doling out what you have they often forget about what they owe.

How Does The Court Divide Your Debt in Divorce?

Washington is a community property state. This means that the government views all assets, and debts, accrued during the marriage as the equal responsibility of both spouses.

That doesn’t, however, mean courts split everything down the middle in divorce.

The court’s primary goal is to ensure both parties come out of the marriage on a relatively even footing. Beyond that, they want each spouse to maintain a lifestyle similar to what they had while married.

While that may sound like a logical way to approach the situation, it often also include debts you weren’t aware of.

If you have separate credit cards, for instance, and your ex purchases a big-ticket item without your knowledge, you may find yourself obliged to pay back that amount. In a community property state, it doesn’t necessarily matter whose name shows up on the bill, you both share the burden.

One thing to carefully consider when it comes to dividing debt in divorce is any outstanding loans you have.

While ending a marriage affects nearly every aspect of your life, it doesn’t automatically alter any financial agreements you made with outside parties.

If your name appears on a home or car loan, divorce doesn’t change that. When you and your spouse establish a line of credit, those terms remain in place. Even if the marriage ends.

Creditors are only obliged to honor the conditions as they appear on the initial agreements. And we’ll say this again for those in the back: Divorce doesn’t automatically alter those contracts.

So, even if your ex gets the house in the divorce, if your name still appears on the paperwork, it can impact you. If your former spouse misses a mortgage payment, it negatively reflects on you.

If it gets bad enough, creditors may come after you for payment or take legal action against you.

Related Reading: Divorce or Bankruptcy: What to File First

Are You Responsible For Your Ex’s Debt?

When it comes to debt and divorce, what builds up during the marriage remains your issue to deal with. Pre-existing liabilities, however, are something else entirely.

What that means is that you’re not on the hook for your ex’s old financial obligations.

Any lingering student loans amassed before your marriage aren’t your problem. Neither are those massive credit card bills your spouse ran up before you got together.

Related Reading: What’s The Difference Between Legal Separation and Divorce?

What if Your Ex Ran Up Debt Without Your Knowledge?

Again, since Washington is a community property state, the court presumes all property and all debt amassed during the course of a marriage, belong to both spouses.

However, if debts were kept secret, and incurred entirely or partly by one party and not for the benefit of the marital community, the court may consider it separate debt. Emphasis on the word may.

In this case, they may make what they believe to be a “just and equitable” division or assign it entirely to the party responsible.

It’s important to remember the court ultimately determines how to divide things. It has the authority to determine whether or not an obligation is separate or community property. They can still award the debt to either party, regardless of whose name it’s in.

Related Reading: Jurisdiction: Where You File For Divorce Matters

Can You Protect Yourself?

The most common way to protect yourself in these situations is to refinance loans.

Divorce agreements often include terms that your ex must accomplish this task by a certain date. This offers one way to shield yourself from future financial misdeeds.

Still, you often have to make sure it actually happens. Even if refinancing was supposed to take place and doesn’t, it can still come back to bite you.

Debts that build up after a separation, but before signing the final papers, fall into a bit of a gray area.

In these cases, the court tries to determine if they’re for necessities or not. A judge might divide common expenses, like an electric bill or utility payment for the family home. But if your soon-to-be-ex puts a trip to Hawaii on the joint credit card, they might view that in a different light.

Once you finalize your divorce, your finances become two distinct things. You have separate bank accounts, credit cards, bills, loans, and the whole works.

As with most legal matters, dealing with dividing debt in a divorce becomes incredibly complicated. In shorter marriages or cases without much in the way of shared property, it can go relatively smoothly. But the more you have to deal with, the more problems usually arise.

It’s important to be aware of your assets in a divorce, and the same goes for debts. Make sure you keep tabs on how much you owe, and where, whether it’s in your name or your spouse’s.

Related Reading: Can You Protect Your Business During a Divorce?

One recent caller touches on the topic of shared debt in divorce. Check out the conversation below:

Caller: “Prior to my separation from my husband, I found out recently that he co-signed for a $40,000 student loan and I had no idea about it. I didn’t even know my son was applying for a student loan. [M]y question is, am I going to be blind-sided in the courts, and is this going to become marital debt? I didn’t make this decision and didn’t have anything to do with it. So is it going to bite me in the butt later?”

Rick: “This one has two parts to it. To the extent, it was a kind of a debt engaged while community, even though the two of you weren’t a part of it–as long as it’s not considered a waste of community assets–then it’s likely to be looked at as a community obligation.

“One thing that I’m hearing is that he [cosigned a loan]. In other words, it’s a student loan with your child’s name on it and it’s the young adult’s responsibility. The debt or the obligation is only going to happen if that young adult defaults on [the loan].

“The other thing though is that [your ex] is likely the first person they go to. So if it’s his signature on it, and the two of you are no longer married, it’s going to be easier or more convenient for whoever the lender is, to go after your husband.

“They’d have to dig deeper. They would have to say, ‘Oh gosh, he’s single now, I wonder if he was married two years ago? And if so, who is his ex-wife, and can we reach out to her too?’ So, you’re down the line in terms of who might be hurt by this.”

Related Reading: 8 Signs They Might Be Hiding Assets in Divorce