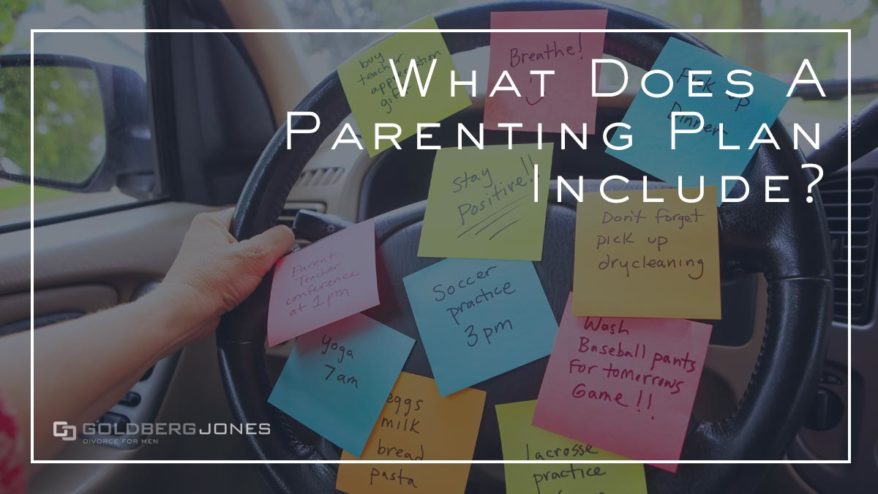 For parents who divorce or otherwise split up, the most important document you have is your parenting plan.

This piece of paper lays out everything related to your child’s life moving forward. It includes all of the custody arrangements, residential time, visitation schedule, and more regarding your children. Because of that, it’s hugely important.

It’s also important to know what it contains and, perhaps even most important, what it should contain.

No two custody cases are ever the same. As a result, no two parenting plans will ever be identical. And under Washington law, there are no formal regulations about what a parenting plan must look like or what it must include.

What Is a Parenting Plan?

The court document that addresses custody matters is called a parenting plan.

In short, if it involves custody, visitation, or childcare decisions, the parenting plan lays out the specifics. Because it defines how much involvement you have in your child’s life, these documents are massively important.

What Goes Into a Custody Plan?

While there’s no official legal blueprint for how to create a parenting plan, there is a kind of informal format. Again, the specifics depend on the particular situation, but in general, parenting plans in Washington include and address the following areas.

The biggest piece of the custody plan puzzle is the residential schedule. This lays out, in great detail, where the child lives. Most often, the child lives the bulk of the days with one parent, while spending previously arranged days with the other.

How this breaks down varies, but one common pattern is the “every other weekend” formula. That oversimplifies the situation a great deal, but it gives you a general idea.

As the name infers, the child spends the bulk of the time with one parent but lives with the other on odd weekends.

It’s also common for the weekend parent to receive shorter visits during the week. Think a movie, a dinner, or a ball game and you get the idea. This also often depends on how close you and your ex live to one another.

Though they get thrown around often in conversation, Washington doesn’t officially use the terms custody or visitation. Instead, parenting time is the legal designation. Despite the terminology, the parent with the most overnights is generally the one most consider the parent with “custody,” while the other gets “visitation.”

When it comes to holidays, parenting plans tend to split them between the parents. They also usually alternate. For example, if you get your son on Christmas in even years, your ex may get him in odd years.

Your parenting plan most likely maps out who the child spends every holiday with. This includes biggies like Christmas and Thanksgiving, but also Memorial Day, Labor Day, and all the others. Maybe you like to go big on Arbor Day.

Most include accommodations for special occasions and things like Father’s Day and Mother’s Day. An allotment of vacation time also usually makes an appearance. They often even contain specific transportation details, drug and alcohol restrictions, and many other elements.

Kids count down the days to the major school breaks, but they can be difficult for parents after divorce. Fortunately, the parenting plan should also break down where the child spends these vacations.

When a child is in your care, you have the ability to make immediate decisions. What to eat, where to go, that sort of thing.

But when it comes to major life choices, like education, health care, and even religion, among others, the parenting plan lays out who has final authority in those matters.

In most cases, parents share joint decision-making powers. This means they have to work together to come to a conclusion. But depending on the circumstances, the parenting plan may limit this power in certain areas or across the board. The document should also lay out the specific reasons for this.

How to Create a Parenting plan

As stated, Washington doesn’t have a template for how to create a parenting plan. What we laid out serves as a hypothetical example.

That said, these basics often serve as a starting point. Again, each case differs depending on the child’s needs and the specific details of the situation. But these are areas a parenting plan should and likely will address.

While this may be a jumping-off point, you must consider a wide number of variables.

Proximity, for example, has a huge impact.

It’s also possible for parents to hash things out and come to an agreement on their own.

For instance, if your family places a huge emphasis on Thanksgiving, you may be able to negotiate to have your child for that holiday every year in exchange for concessions elsewhere.

In the end, however, the court must approve any deal you strike. They want to make sure a parenting plan serves the best interests of the child and doesn’t skew too heavily one way or the other. And as in most family law matters, it’s probably in your best interest to consult an attorney before anything becomes official.

Related Reading: The Importance of Jurisdiction in Child Custody Cases

On a recent spot, one caller had this very topic on his mind. It’s also a question that comes up often. Does he need a parenting plan if he and his child’s mother never actually married?

Listen to the Conversation:

Caller: “I’m not married. I have a three-and-a-half-year-old, and if I get separated, do I need a parenting plan?”

Sarah: “You are married, or you’re not married?”

Danny: “He’s not married, he’s got a three-year-old. And I looked at Rick Jones’s face and there was an exclamation point on it, ‘Yeah, you need a parenting plan.'”

Rick: “Absolutely. The good news is, you’ve already probably signed a [acknowledgment of parentage] at the hospital. So the issue isn’t that you have to prove you’re the father, but once you separate, there’s nothing put in place, no schedule put in place.

“So there’s already a presumption that the child is remaining with the mother. What you need to do, even by agreement, is to initiate a parenting plan that says, ‘Hey, just like two divorcing people, we have to have a rule book in place.’”

Danny: “Right, but it’d be…essentially the same thing. Now, is it weighted for or against somebody who’s not married, or is it the exact same thing? Like, you got a three-year-old, and you have a three-year-old.”

Rick: “The exact same thing. As in, whether you’re married or not.”

Caller: “Is it a different court that handles it, because it’s not a divorce, because you’re not married?”

Rick: “There’s no such thing as ‘divorce court.’ It’s all handled in the Superior Court which is county-based here [in Washington State].”

Danny: “But if somebody just says, I wanna break up, grabs the three-year-old, and moves to Wyoming, that’s when a lawyer will get involved for sure.”

Rick: “Well, they could try to do that, and then, of course, someone here in [the state] would get the case filed immediately. And I wouldn’t want to be the person that high-tailed it to Wyoming, because all of a sudden their credibility is shot.”

Related Reading: Guardian Ad Litem: What You Need to Know