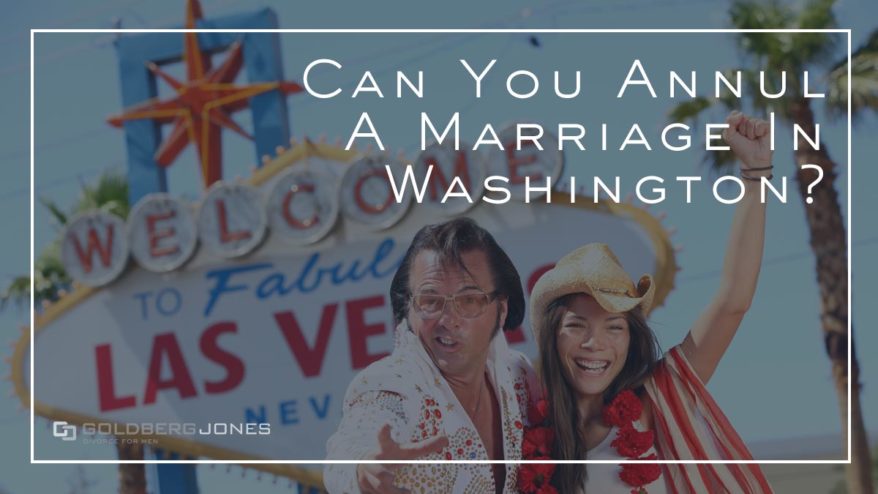 Everyone has heard some version of this urban legend. A wild night in Vegas ends up in a marriage officiated by an Elvis impersonator. The following day, when clarity and regret set in, the first task of the newlyweds is to usually seek out an annulment. While getting drunkenly hitched on the Strip is an extreme example, there are several situations where one might need to dissolve a marriage quickly.

Annulments can be confusing and needing one can be stressful. You likely have questions that need to be answered and the starting point can be unclear. Fortunately, we can help.

What Is An Annulment?

To start, while the word annulment is commonly used, the legal term in Washington is a declaration of invalidity. As the name implies, this petition declares a marriage or domestic partnership invalid.

Annulment is usually associated with the Catholic church. Traditional Catholicism didn’t allow divorce. If you annulled a marriage, it was as if it never happened.

The Difference Between A Divorce and A Declaration of Invalidity

There are a few key differences between a divorce and a declaration of invalidity.

With a divorce, both parties dissolve a valid marriage through legal legal channels.

A declaration of invalidity asserts that the marriage was never valid in the first place. From that point forward it is as if it never existed. On a technical level, you were never married.

Either spouse can petition for a declaration of invalidity, though they must provide proof of why the union should be voided. This burden falls on the person seeking the annulment.

Related Reading: Moving Out: What You Need To Know Before You Go

How to File for Declaration of Invalidity?

In Washington, you must file a Petition for Declaration Concerning Validity in the superior court of the county where one spouse resides. It doesn’t have to be you, but one of you must live there.

After filing the petition, you must serve the opposing party. The superior court clerk’s office where the petition was filed can explain the different options of how to serve a spouse such as, what to do if your spouse lives out of the state or can’t be located.

Once you do all of this, there will be a hearing. Both parties then have the chance to state their cases about why the marriage is or isn’t legitimate.

Related Reading: A Guide to File for Divorce in Washington

Do You Qualify for A Declaration of Invalidity?

Annulment is rare compared to divorce, but it still happens occasionally. In Washington, there must be specific cause to petition for a marriage to be declared invalid under RCW 26.09.040.

The court requires specific examples of why the marriage is illegitimate. Reasons include but are not limited to:

It’s also important to note that for the state to consider a marriage invalid because of fraud, the fraud must directly relate to the marriage. For example, one party hid a venereal disease or knowingly concealed a pregnancy.

If you don’t meet one of these requirements, you will likely have to follow a traditional path and divorce.

Do You Divide Property In A Declaration of Invalidity?

Just like a divorce, once the marriage is declared invalid, you must resolve other issues.

There are assets and debts to divide, custody to determine, and more. Child support, spousal maintenance, restraining orders, and attorney fees; you have all of the usual matters to deal with.

If you are considering getting an annulment and are not sure if your marriage qualifies, or if you have questions regarding a declaration of invalidity, it’s in your best interest to consult with an attorney. A lawyer who specializes in divorce will most likely be the best resource for information regarding your situation.

Related Reading: How the Division of Property Works in Washington

Question From The Radio

One of our founding partners, Rick Jones, has a regular guest spot on the Danny Bonaduce and Sarah Morning Show. On the air, he takes family law questions from listeners, including one related to the topic of annulment.