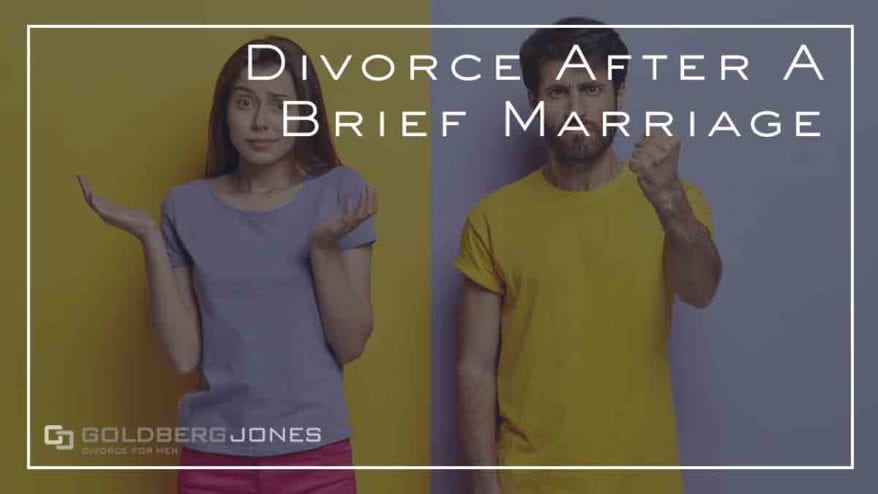 As a general rule, the longer the marriage, the more complicated the divorce. The other side of that coin is that in shorter marriages, ones without kids and with little shared property to divide, divorce can be relatively simple.

Our founding partner, Rick Jones, regularly stops by the Danny Bonaduce and Sarah Morning Show, where he talks all things family law. A recent caller realizes her new marriage isn’t a good fit and, rather than cling to something, wants to nip it in the bud.

No matter the length of a marriage, the steps to begin the process remain the same. Along the way, other things pop up that take more time. Much more in some cases. But whether you’re talking about a brief marriage or a 50-year union, it all starts in the same spot.

Related Reading: Costs Of A Divorce In Washington State

Listen to the Conversation Below:

Caller: “I recently got married and realized it’s not working out; it’s not a great fit. How do I start the divorce process?”

Rick: “Well, first of all, I commend you for recognizing it’s not going to work out. So many times I’m hearing from somebody who’s ten, 15 years in and they say, ‘You know, I knew this wasn’t going to work out.’ The reason why I say that is from a legal perspective the issues are likely to be far more simple. My guess is there are no children involved?”

Rick: “That also tells me that the finances are likely to be simpler as well. There hasn’t been an accumulation of community property. So the basic answer to your question of ‘How do you start this?’ is you file what’s called a Petition For Divorce with the court.

“It starts the clock running, and as long as you two can come to an agreement within 90 days–90 days is the waiting period [in Washington State]–that’s when you can get this finalized.

“There are a couple of ways to do it. Certainly, the best way is to hire an attorney. It shouldn’t be a hugely expensive venture because of the simplicity of it.

“Another way to do it: there are several online options–especially ‘Washington Divorce Online‘–that are able to create and draft documents for you at an even lesser cost. And then thirdly, you can do this yourself.“

Danny: “So that’s for people that have an uncomplicated divorce? If there is such a thing.”

Rick: “Yeah, it needs to be an agreed-upon divorce. So many people use that phrase, ‘uncontested [divorce],’ but a lot of times they don’t use it properly. An ‘uncontested’ divorce truly means that the two of you have full agreement. So what you’re really doing is you’re asking somebody to draft documents to reflect your agreement.”

Related Reading: Should I Represent Myself?