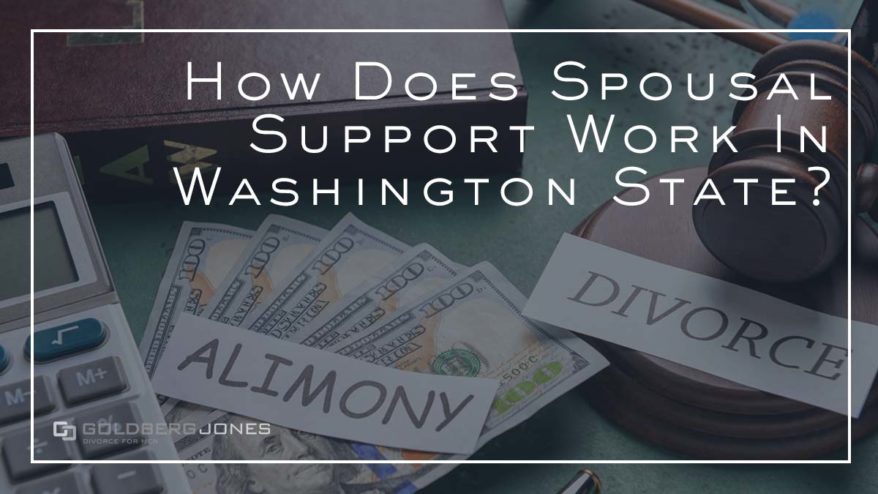 Once you’ve handled the division of property, child custody, visitation, child support, and all the rest, the court may order spousal support.

What Is Spousal Support?

Spousal support, also called alimony or spousal maintenance,  is court-ordered payments intended to lessen financial hardship for dependent spouses after divorce. It can last for a short time or continue indefinitely depending on your particular circumstances.

Spousal support most often comes into play when there’s a significant gap in earning potential between spouses. It also figures into cases of substantial financial need.

How is Spousal Support Calculated in Washington State?

Spousal support regulations vary a great deal from one state to the next. For instance, both Oregon and California have multiple types that the court can award to fit specific conditions. The system in Washington, however, is more fluid and less formulaic.

With no uniform criteria, individual judges use a list of factors to decide whether to award spousal support, the amount of these payments, and the duration.

They can be temporary in nature or last indefinitely, and payments can be periodic and regular or take the form of a single lump sum. In these cases, the courts have broad discretion.

When it comes time to determine spousal support in Washington, the key factors considered include:

Essentially, the court looks at any and all factors that further influence a spouse’s financial state following a divorce. All of these pieces play a role. The longer the marriage, the more likely the court is to award spousal support.

Support may also be awarded to help one spouse get training to advance employment opportunities, increase future earning potential, and gain financial independence.

In cases where one spouse contributed substantially to the education or financial prospects of the other, the court can also award spousal support. This is most common in situations where one spouse worked to put the other through school, or along those lines.

In some cases, the court can award spousal support indefinitely. This most occurs most often when a significant disparity in the earning capacity exists between spouses, one unlikely to ever close. It also pops up in situations where the dependent spouse is unable to work or find suitable employment due to health issues.

Washington’s non-formulaic approach to spousal support means the process is much less predictable than in other states.

Since the outcome is far from guaranteed, it makes negotiating a longer, more difficult—not to mention expensive—process. More time in court also generally means additional stress to those involved.

Can You get Support Payments If You Were Never Married?

No, the court only gives spousal support when you were married.

How taxes will work

Any spousal support ordered after December 31, 2018, is subject to the Tax Cuts and Jobs Act of 2017. It abolished a tax deduction that had been on the books for more than 70 years.

For divorce settlements after December 31, 2018, the paying spouse is no longer be able to deduct this amount. At the same time, the recipient will no longer have to pay taxes on that money.

The previous situation gave the payer a major “above the line” deduction (as opposed to an itemized deduction).

The deduction often saved the payer a substantial sum, which left more money to divide between exes. The new way reduces the gross amount and washes away the benefits of the deduction.

One important thing to be aware of with spousal support is how difficult it is to modify after the fact.

To alter an existing order, a significant, unexpected change in circumstances must happen. This can be the loss of a job, receipt of a significant promotion, or similar occurrence. The party filing for the adjustment needs to provide evidence supporting these claims.

It can be time-consuming and costly to amend, and even then, the court may resist. Because of this, it’s critical to make sure you understand all the details about your spousal support order before you sign.

If both parties settle on terms, it is possible to modify an existing agreement on your own.

The exes need to enter into a written contract laying out the specifics. This then requires a judge to sign off to become official.

Item of Note: If you already have a support order and want to modify it, it will likely be subject to the new tax code. *

Spousal support payments come to an end if one spouse dies. No one can force you to make payments to the deceased’s estate, nor can you collect payments from their family.

If the recipient remarries, that also constitutes a substantial change in circumstances. Payments then terminate by law in Washington, unless otherwise specified in the divorce decree.

Finances following divorce have a huge impact on the next phase of your life. Moving forward is so much more difficult when you start off in a preexisting hole. Which is why taking the time and making sure you have the optimal spousal support agreement, whichever side you fall on, becomes so vital.

Related Reading: “Average Divorce Costs In Washington” (In-depth look at the costs of divorce; expected and the unexpected expenses that you may be faced with during and after your divorce.)

Other Reading: Rebuilding Finances And Protecting Your Credit Score During Divorce
Other Reading: My Ex Won’t Follow The Divorce Agreement