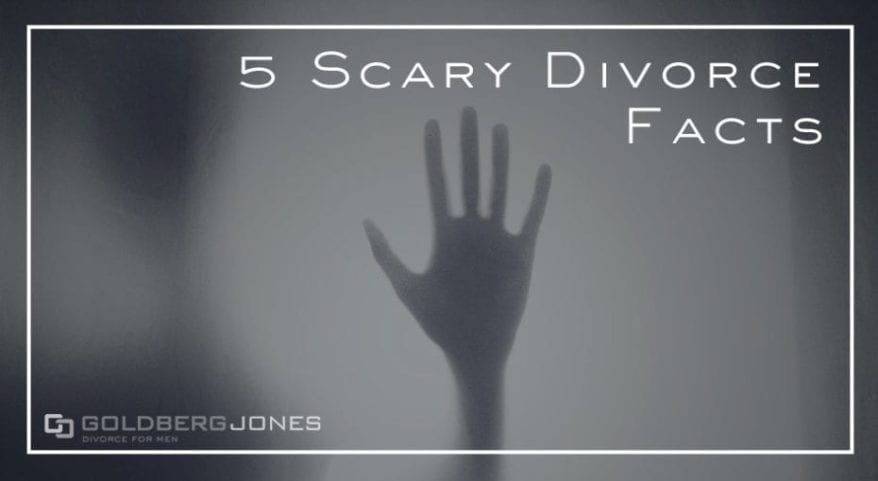 Halloween is upon us, or just past, depending on when you read this. Regardless, the leaves have turned, the days have grown short, and it’s the spookiest time of the year. Divorce is often a harrowing, uncertain period of your life. It may be the best choice, but that doesn’t make it easy. You have a great deal to consider, and not to pile on, but there are a handful of scary divorce facts to be aware of.

Some of these are useful information about things to avoid. Others may simply present an interesting tidbit. But maybe knowing these things ahead of time may allow you to avoid potential hazards.

Weddings are huge milestones. People dream about these events for years and spend countless hours planning and perfecting the big day. While you want it to be absolutely flawless, consider dialing things down a bit.

The more a couple spends on engagement rings and wedding ceremonies, the more likely they are to divorce than a couple who spends less.

From a certain perspective, it makes sense. Elaborate weddings don’t come cheap. And money is one of the most common sources of friction in marriages. If you start off your wedded bliss in a massive pile of debt from the party, that may lead to trouble.

The mental health risks following divorce are well documented. Self-esteem takes a hit and depression spikes after a marriage fails. But divorce also poses a variety of physical health risks, especially for men.

Instances of diabetes, substance abuse, hypertension, heart disease, and even cancer rise in the wake of divorce.

Suicide rates in men also soar following divorce. It’s a tough time and it’s easy to let yourself go, skip the gym, and eat McDonald’s for dinner every night. But it’s also vital to look after your health and wellbeing. The people who care about you will appreciate the effort.

No one likes a long commute, but many of us slog through it day after day. Trying to find something good to listen to on the radio is the worst. Sure, it may impact your mood, but a long commute can also have a detrimental impact on your marriage.

A nation-wide study out of Sweden found that couples, where one spouse commutes more than 45 minutes each way, have a much higher risk of divorce.

Being stuck in traffic or in a crowded bus may suck, but can also damage your relationship as well. Maybe consider moving closer to work or landing a job closer to home.

4. Smoking Is Bad For Your (Marital) Health

By now everyone knows smoking cigarettes is bad for your health. What you may not know is that it’s also bad for the health of your marriage. Over the years, a number of studies, including ones from the University of Michigan and the Australian National University, looked at the relationship between cigarettes and divorce.

All three found that, to varying degrees, people who smoke experience a much higher incidence of divorce than nonsmokers. There’s not necessarily a direct causal link—researchers have also examined the connection between smoking and mental stability and as a compatibility factor in relationships—but there is a definite association.

Many couples look at living together before marriage as a kind of practice run, a marital test drive if you will. On paper, that’s sound logic. You can see if you’re truly compatible before taking the next step. In practice, however, that’s not always the case. Recent data says otherwise.

According to the numbers, couples who live together before marriage have a higher likelihood of divorce before their marriage hits the ten-year mark.

These may sound like scary divorce facts, but as with most statistics, they’re best taken with a grain of salt. Checking one or more of these boxes doesn’t automatically doom your marriage to failure.

Just because you have a long commute, doesn’t mean divorce lurks in your future. And plenty of smokers live happily married lives.

Still, these realities do impact many marriages. Knowing these factors often impact divorce may help you avoid the pitfalls, or at least take steps to counteract them. Scary divorce facts are just that, but they can also prove useful.