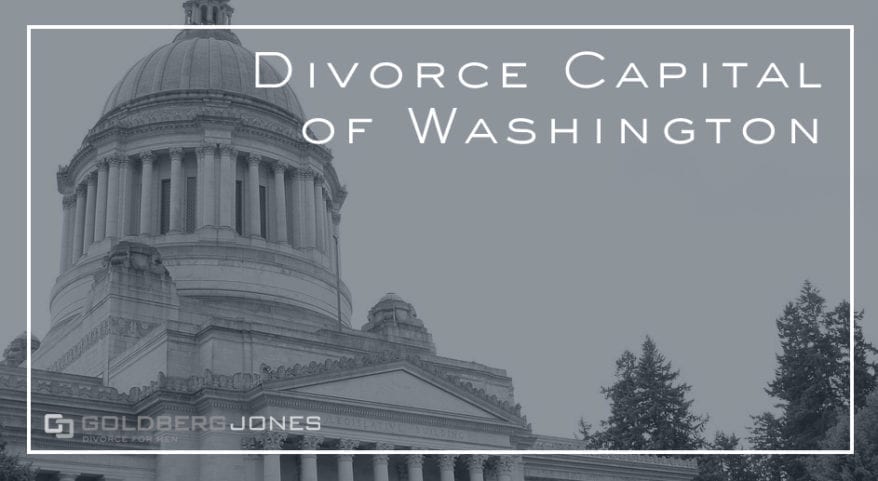 UPDATE: According to the latest data from 24/7 Wall St., Clarkston remains the undisputed heavyweight divorce capital of Washington. Things have changed a bit, however. The divorced population dropped slightly, from 25.7% to 22.7%. Curiously, the married population also declined, dipping from 38.7% to 37.8%.

Perhaps a bit more surprising, Pullman is more than just the home of Washington State University, it’s also been dubbed the “Lentil Capital.” Amidst all of these others, Washington also has a new one, a divorce capital.

Divorce affects many people and is often an unfortunate, unpleasant part of life. As roughly half of all marriages ultimately break up, it’s also common. The numbers reach even higher for second and third tries. But divorce rates vary widely from state to state, even from one city to another.

Recently, USA Today’s 24/7 Wall St. took a deep look at the 2016 U.S. Census data. The goal was to determine the divorce capital of each state. They revealed which city has the largest percentage of divorced for residents over 15-years-old, including Washington.

And the divorce capital of Washington is…

Is this something to cheer? Not sure.

Located at the very southeast corner of the state, Clarkston sits where the Snake and Clearwater rivers meet. Home to just over 7300 residents, it’s positioned right across the water from Lewiston, Idaho.

According to the 24/7 report, the divorced population is 25.7%, more than a quarter of Clarkston’s citizens. This more than doubles the statewide average, which clocks in at 12.1% across the Evergreen State. On the other side, 38.7% of the population checked off the married box in 2016.

What Does This Mean?

The question arises: what does all this mean? Like many divorce statistics and numbers-based analyses of divorce, the meaning varies. Different people look at this and see different things.

Does it mean that living in Clarkston, Washington dooms your marriage to failure? Considering almost 40% of the population is married, happily or otherwise, no, it doesn’t.

The report does offer a bit more insight into Clarkston’s situation than most of the other divorce capitals on the list. It’s also a unique case. At 25.7%, it has the highest divorce rate of any of the 50 divorce capitals. It also has the largest gap between the city’s divorce rate and the statewide average, with a 13.6% difference. Additionally, it’s one of 19 cities to exceed 20%.

One potential explanation for this is money. Divorcing couples often cite financial troubles as a cause for a crumbling marriage, and such worries often place added strain on a relationship. Poverty frequently goes hand in hand with higher divorce rates.

Of the five highest cities noted here, four of them—Clarkston; Truth or Consequences, New Mexico; McMinnville, Tennessee; and Newport, Arkansas—face dire financial truths. Each of the four has a lower median household income than both state and national averages, they have a poverty rate well above the national average, and a larger percentage of households earn below $10,000 a year than the national average. In Clarkston, more than 20% of the total population lives below the poverty line.

Again, this doesn’t mean a marriage is destined to end prematurely. Many couples live happily in these circumstances. But money can provide extra pressure and additional friction in a relationship. Finances often form a big part of a divorce.

No two marriages are identical. They’re as different as the people who tie the knot. At the same time, no two divorces ever play out exactly the same. What destroys one marriage doesn’t always ruin another.

Many factors go into ending your marriage. It’s rarely one thing. Yes, location can play a part. But in the end, these numbers are just numbers. They offer an interesting way to break down divorce, but they don’t represent every case.

If you have questions about divorce, don’t hesitate to contact Goldberg Jones at our Seattle office.