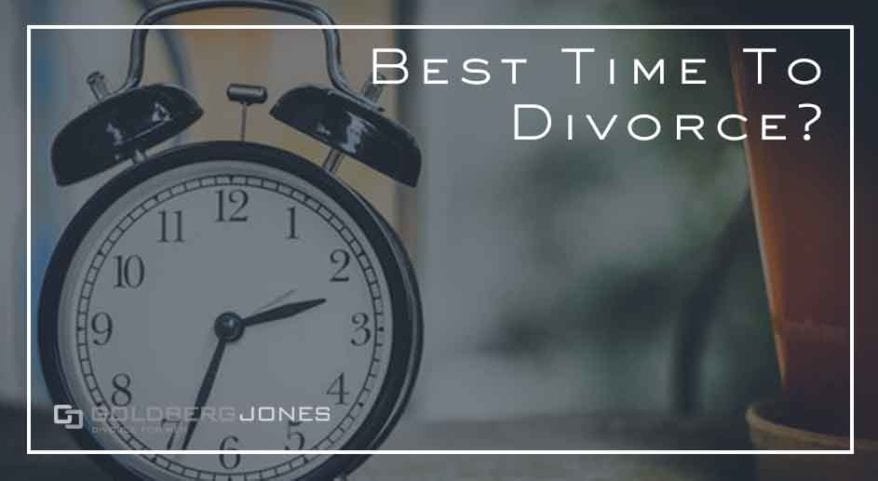 Ending a marriage doesn’t happen overnight. The relationship itself didn’t likely just stop one day, it probably deteriorated over a long period. In a similar vein, you can’t snap your fingers and divorce in an instant. Divorce is a process. It often takes months, or longer, and the question of when to file pops up. Before starting this journey, it’s important to consider the best time to divorce.

As with most questions that surround this topic, the best time to divorce is relative. No two situations are ever exactly the same, so there’s no one-size-fits-all answer. It truly all depends on the circumstances.

Timing and Time of Year

In recent times, January has become known as “Divorce Month,” a season when couples look into their options for ending a marriage. People often put off such an unpleasant task until after the holidays. Holiday stress also often triggers the decision. End-of-the-year financial reasons, like taxes or work bonuses, frequently play a role. And sometimes people just want a fresh start in the new year.

A recent study from the University of Washington supports this anecdotal evidence with numbers. Examining data from 2001 through 2015, researchers found that divorce filings rise sharply beginning in January, though the numbers don’t truly spike until March. During this time, people often explore their options, save money, talk to attorneys, and generally establish a plan of action.

Because it takes so long, many people look at this as the best time to divorce. If you file early in the year, timing-wise, you’re more likely to wrap things up during the summer. This is a consideration when there are kids. Once finalized, parents can establish a new routine along with a new school year. This can normalize things and help kids adjust. Courts are also hesitant to cause wholesale change for kids during a school year. They’re often more open to altering a custody situation during the summer.

But January isn’t the only divorce month. The January-to-March window sees a bump in divorce filings of 33%. But the period from July to August also sees a similar leap, climbing by 30%. This is a time when kids are out of school, families go on vacation, and fragile marriages feel a great deal of pressure.

Related Reading: Should You Hire A Divorce Attorney?

A common refrain is that people stay in otherwise unhappy marriages for the kids. Parents may not want to cause any undue stress or shake up a child’s life too much. So instead, they put off the inevitable.

A lot of couples wait until kids grow up and go to college or otherwise move out. In these circumstances, people consider this the best time to divorce for their situation. Whether or not that’s true is a topic of some debate. Some couples may pull it off. It’s one thing if you’re simply not in love anymore but can remain amicable.

On the other hand, in high-conflict cases, it may cause more harm than good. If all a couple does is fight, staying together when they otherwise wouldn’t often intensifies those ill feelings. And with kids stuck in the middle, all that strife may wind up worse than the parents separating.

Again, it’s all relative. For some couples, the best time to divorce may well be after the kids have moved out. In other situations, maybe they shouldn’t wait.

Related Reading: What Are the Odds of Getting Full Custody?

When a marriage hits the ten-year mark, spouses often become eligible for certain retirement benefits. After that milestone, you can claim Social Security based on your former spouse’s work history. When it comes to military pensions, the length of marriage impacts how much a spouse can claim in the divorce.

Because age and the length of a marriage impacts divorce settlements, some couples delay filing. This also depends on how close and whether or not the spouses can stand to stay together. But some couples wait until they get to a point where it seems like the best time to divorce.

Health insurance is a big issue, one that leads some couples to put off ending their marriage. In most cases, you can’t remain on your ex’s insurance after divorce. This is a big problem, especially as people age or deal with chronic, continuing health concerns. Unless you can afford separate coverage, or otherwise acquire your own, it’s a problem for many people.

Some people remain married until they reach the age to qualify for Medicare. Usually, this isn’t until 65, unless you have a disability. Regardless of age, the best time to divorce may be after you’ve carefully considered your health care options.

In some cases, couples opt for legal separation instead of divorce. While divorce legally dissolves a marriage, with legal separation, it remains technically intact. For all intents and purposes, the relationship is over. Legal also separation often even involves parenting plans, spousal support, and other court orders, much like a divorce.

Still, people choose this option for a number of reasons. Finances often figure in. Filing taxes as a married couple may save money. Couples wait until they qualify for Social Security or other retirement benefits. Spouses can still inherit property in legal separation. As mentioned above, health insurance is a big deal. In some cases, though not all, spouses remain covered even in cases of legal separation. If people oppose divorce for religious or moral reasons, this provides a workaround.

In some instances, legal separation becomes a permanent state. For others, it’s temporary for one reason or another. A couple may want to wait until it’s the best time to divorce for their situation, biding their time until then.

The decision to end a marriage is huge, one of the biggest choices you’ll ever make. Many factors lead to this conclusion, and every situation plays out differently. One key element is finding the best time to divorce. What that means varies from one case to the next. For some, it may entail putting it off for a time, whether long or short. For others, it may need to happen ASAP.