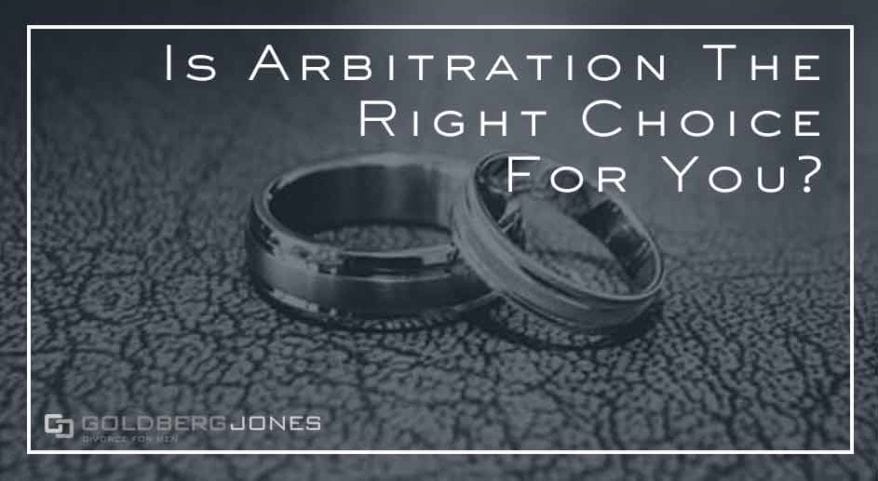 Going to court during divorce is stressful, hectic, and expensive. Among other things. There are, however, other options out there for ending a marriage out there besides trial. One path many couples choose is arbitration. It can be complicated and doesn’t fit every situation, but it may be right for your case.

What Is Divorce Arbitration?

In family law, arbitration is an alternate dispute resolution (ADR). That’s a fancy way of saying it’s an option besides the traditional method of going to court, presenting arguments, and having a judge rule.

In arbitration, the parties contractually agree to handle the matter privately. The two sides enlist a third party, an arbitrator, to come in, meet with everyone, and decide on the issues at hand.

In this way, divorcing couples work to reach terms on child custody, division of property, who gets the pets, spousal support, child support, and all the other topics that arise during the process.

As it is voluntary, both spouses must agree to enter into family law arbitration. No one can be compelled into this undertaking against their will.

When they do sign the agreement, however, it is legally binding. Both sides consent to have their dispute settled in this arena and abide by the ultimate decision.

Like with any legal option, it’s likely in your best interest to consult an attorney or experienced professional before entering into any binding agreement. Because it’s not the court, if things aren’t going their way, some people think they can get out of arbitration in the middle.

With a few exceptions, that’s not an option unless the other party also approves. But if they’re winning, why would they do that?

Also, because it’s not the court, you can’t appeal any rulings handed down. Yet another reason to carefully consider all the options ahead of time.

Related Reading:  Are Divorce Records Public? (Yes, here’s how to acquire them.)

How Does the Process Work?

While it has been used for years in a variety of types of lawsuits, arbitration has become a popular tool in divorce. Though it’s not a trial, the process does have some of the earmarks of a court proceeding.

Similar to a traditional trial, in arbitration, both sides prepare cases, lay out arguments, and present evidence to support their claims.

Instead of doing this before a judge, they do so in front of an arbitrator, often a lawyer or a retired judge who you pay.

Most likely, if you and your spouse have each retained divorce attorneys, they decide on an appropriate choice to oversee your case.

Despite parallels, arbitration is usually much less formal than a courtroom setting.

Privacy: One of the big draws of arbitration is that it offers relative privacy. Though court documents will still be public record, the actual proceeding is not public, as with a trial. It’s just you, your spouse, your representation, and the arbitrator. No need to air dirty laundry in public.

Cost: Though arbitration can still be expensive, it most often costs substantially less than going to court.

Speed: A big part of why this process usually costs less than a trial is because it’s often much faster. The process itself doesn’t take as long, and with different, less strict rules and regulations, divorce lawyers often don’t have to spend as much time in preparation.

Flexibility and Convenience: It can take months to set a court hearing. And when that finally happens, they rarely take your schedule into account. Arbitration, on the other hand, can be scheduled at your convenience, when it works best for the two sides. A date can also usually be arranged much quicker than a trial.

Less Formal: Arbitration is a much less formal affair than a trial and has simpler rules. This environment puts some people at ease. It often soothes the heightened tensions of court, gives participants more opportunity to speak up, and leads to the two sides working better together.

Related Reading: What is Mediation? Different Types of Mediation Styles

Why Arbitration May Be The Wrong Choice

In certain cases, there are great benefits to arbitration. That’s not to say it isn’t without potential disadvantages.

The fact that, unlike court, there is no appeal process for unfavorable decisions turns some people off to arbitration.

Especially as divorce cases can be unpredictable, the idea of being stuck with the resolution unsettles some.

Though an arbitration agreement is binding, if your spouse doesn’t abide by it, you may still have to go to court to enforce the order. This takes a lot of time and money, and perhaps a middle step could have been avoided.

An alternative to a traditional divorce trial, arbitration offers a good option for divorce in certain cases. Though there are times when it’s a great choice, there are other times where another option is preferable.

As with most legal decisions, it’s in your best interest to consult a divorce lawyer beforehand. Make sure you fully explore and understand all of your options before making such a monumental decision.

Related Reading: A Look At Divorce Rates By Generation