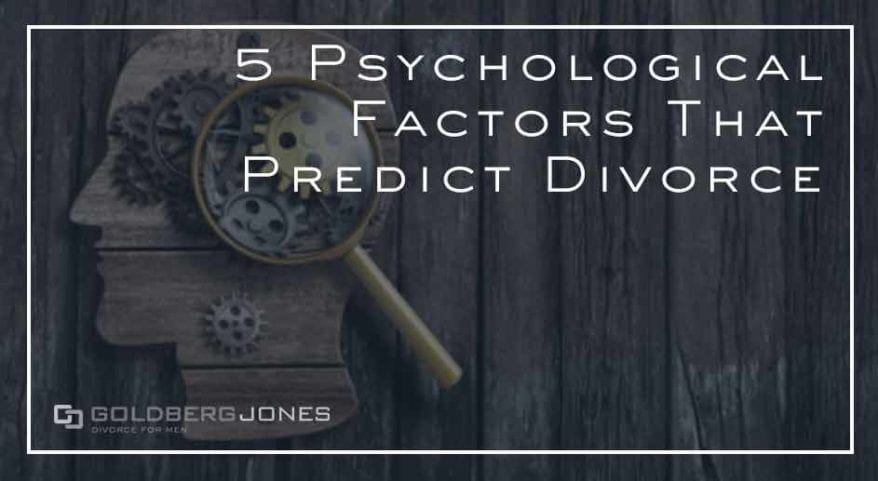 It’s rare that one thing leads to divorce. Sure, cheating is frequently a deal breaker, but usually, a storm of other factors lead up to that. Most cases aren’t exactly cut and dry, and what causes divorce is a complex topic. But can we see it coming? Are there psychological factors that predict divorce?

The short answer is that no, there’s no single psychological factor you can point to that definitely says whether or not your marriage is destined to fail. There are, however, many factors that, statistically speaking, hint one way or the other.

These aren’t always definitive stumbling blocks. If you recognize one or more of them in yourself or your situation, that doesn’t mean divorce lurks in your future.

Every marriage is unique and made up of two distinct people. No couple features the same psychological makeup, faces the same pressures, or contains the same personalities. Things that destroy one relationship may have no impact on another.

What this does mean, however, is that you may face a higher risk of divorce. This information provides a different way to view your marriage. It’s worth paying attention to; it may even give you the chance to preempt potential problems. But you shouldn’t focus on them. More than anything, the success of your marriage depends on you, your spouse, and how you deal with things like these.

Age impacts marriage and divorce in multiple ways. The earlier a couple marries, the greater the odds they will later divorce. That makes a certain amount of sense. The older people are, the better they know themselves, what they want and need out of a relationship, and how to get that.

At the same time, the age people move in together follows a similar pattern. The younger people are when they first cohabitate, the greater the risk it will ultimately end.

While age provides a potential psychological factor that may predict divorce, so do other demographics, notably education and religion. The CDC notes that men with a bachelor’s degree have a 65% chance of having their marriages last 20 years.

This sharply contrasts with 47% for those with only a high school education. For women the disparity is even larger, 78% and 41% respectively. Similarly, people who identify as religious have an increased chance of remaining married than those who do not.

It’s long been observed that divorce runs in families. Children of divorce are more likely to divorce themselves. Psychological factors play into this, but research indicates there are genetic reasons as well. Studies show people are biologically predisposed to particular personality traits. Some, like neuroticism, anxiety, depression, and impulsiveness often predict divorce.

This shouldn’t come as a shock, and in fact, we already mentioned it. But infidelity is usually a pretty good way to predict divorce.

Adultery may be a symptom of other relationship problems, and it may be the straw that breaks the proverbial camel’s back. Either way, many marriages don’t survive cheating. That’s not to say it can’t be done, but it’s not the most common outcome.

This may sound obvious, but couples who have contempt for one another don’t tend to last. One spouse viewing the other as inferior doesn’t signify a healthy relationship. There’s not a lot of respect there, and that’s not a solid foundation on which to build a relationship. If you resent your spouse, that’s likely going to come out eventually. And if you regularly face disdain, hostility, and disrespect, you’re probably going to get sick of it before too long.

Again, none of these psychological factors predict divorce with 100% accuracy. And what ruins one marriage doesn’t necessarily ruin another. They may anticipate problems down the road.

Then again, they may not. You and your spouse may have the tools to deal with these and other potential hang-ups. However, if you check off any of these boxes, you are, statistically speaking, more likely to divorce.

Signs They May Be Hiding Assets During Divorce

How To File For Divorce in Washington State