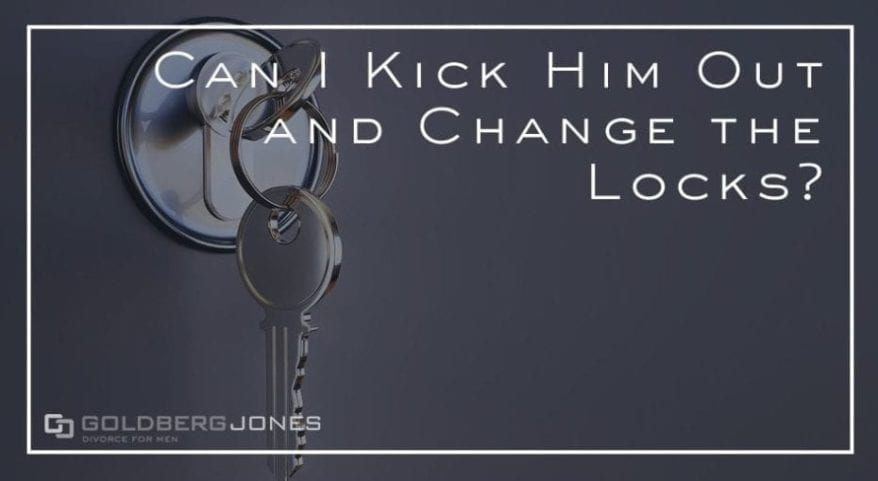 Our founding partner, Rick Jones, regularly stops by the Danny Bonaduce and Sarah Morning Show to answer family law questions from listeners. He’s recently fielded multiple questions about the legal grounds for giving your spouse the boot, or what to do if you’ve been given the boot.

CALLER: “I am so over my husband right now. To sum this up, we have no kids. I own the house. I’ve always owned it and lived in it since we’ve been married. He’s rarely home and when he is he’s a train-wreck. Next time he’s on the road for work, can I move out all his stuff and change the locks? I’m just tired of the whole thing.”

Rick: “Well, when there’s nothing filed with the courts, that means the court has not issued any sort of order putting any rules in between the two of you. I call that ‘self-help.’ So I guess the answer is: yes she can. Now the question though, is what does he do? The repercussion is that it may end up making you look bad if it does become a court issue.”

Danny: “To who though, Rick? That’s the thing. Most of the stuff I know about this stuff comes right out of your mouth. So here’s the thing: who’s she going to look bad to if it’s a no-fault state? Don’t you just not care?”

Rick: “With some of the facts she talked about it’s probably not ever going to get to the court, right, because what’s he gonna do? He’s going to come back and say, ‘My stuff’ is here, it’s just outside.’

“But, imagine a circumstance. Let’s say they had kids, that there was a contested custody issue. Because right now, we’re only hearing her side of the story.

“There’s always two sides. So let’s say he comes back and has a good argument. He says, ‘And by the way, to demonstrate what I’m talking about this person, look at what she did while I was out on the road.'”

Danny: “So we agree that she can do it, it just might not be in HER best interest to actually physically do it.”

Rick: “It wouldn’t be legal advice.”

While the first caller dealt in theoretical, the second has more practical, pressing concerns. The caller was kicked out of a shared house by his ex. What can he do?

CALLER: “My wife and I have been married for about 12 years. When I first met her we lived in a house that she legally owned. It burned to the ground. So with the insurance money, she and I purchased a house that we currently live in.

“My wife’s kinda gone down a dark road and blaming me. Pretty much kicked me out of my house saying this is ‘her house,’ this is ‘her inheritance,’ just going cuckoo.

“So my question is: is it legal what she did? To kick me out of a house that I’m also part owner of which my name is on [the deed]? Because she threatened if I come back she’s going to get the police involved and the whole nine yards.

“Luckily we have no kids between the two of us, which is nice. So if that is the case, what are my legal grounds as far as the house goes? Am I able to say, ‘Well fine then you owe me half the equity, buy me out of the house?

“Do I need to tell her to sell the house because that’s primarily where her and my grandson live? I’m just kinda like, what do I do here’?”

Rick: “I do hear a couple of questions in there. The first one is: ‘Can she do that?’  This goes back to what we’ve talked about before, which is ‘self-help.’ She said, ‘get out.’ And you did?”

CALLER: “Let’s put it this way, I was threatened if I didn’t get out she was going to have some people come over to happily help her get me out.”

Rick: “That being said, it is sort of a tennis match. I get where he’s coming from, too. Because the next thing she may have done if he said, ‘Heck with that, I’m staying right here,’ she may make a call to the police and say, ‘Oh now he’s threatened me.’ So there are several ways to address that issue, but I just want to talk to that first point.

“Your second point has to do with the characterization of the property.

“The fact that the home was owned apparently outright by her, or at least all the equity in the prior home was hers as separate property, then the insurance money is going to be considered separate property as well.

“Now, after time though, and like many things, as you do with this money, it’s possible it gets a little bit convoluted. It’s up to her to try and trace it back. To demonstrate to the court that it started as her separate [property], and one house turned into separate [property] in another house.

“Now you’ve been paying the mortgage on this new home I assume as well. So the key really is to do the opposite of that.  Trace it to community funds based on your [collective] income during…your marriage.”

CALLER: About 12 days ago I took off on a planned camping trip. And on my drive home I got a call from the wife. She said, ‘Do not come home. I packed all your stuff up. It’s in your truck at your son’s house.’ So, what are my legal rights here? Four days ago, I was served [divorce] papers. She did allow me to come back to the house to get some personal stuff to get by for a few days…What are my legal rights to get in and get other stuff I need? The paperwork I need to do my filing, my bank account statements…”

Danny: “You call a lawyer, man. That’s what you do. Your wife served you without telling you. You had to see this coming, this woman is not out for your best interests. Will you tell him what he should do about this, Rick? Because I don’t know.”

Rick: “Well, the first thing I’m hearing is 12 days ago. Wow, heartless…but it sounds like along with the papers you were served, along with just the divorce filing itself, it sounds like there was some sort of restraining order that doesn’t allow you to come back onto the property for now. Is that correct?”

CALLER: “In that paperwork, it doesn’t say [anything about a] restraining order. She just said, ‘Do not come home.’ I didn’t know what my legal right was to get in. I own the house.”

Rick: “And this is where an attorney is going to want to see those documents just to make sure that you’re seeing or reading them correctly. But if there is truly no order there, no restraint signed by the judge, that tells you, you cannot return, then there is nothing to prevent you from returning.

“Now, obviously, that may be asking for trouble. You walk in the door and maybe there’s some sort of a history or a perceived threat of domestic violence. Then the cops are there and things go sideways a little bit.

“But, as long as that’s not the case. For example, if you know she’s not going to be there for a time, which is unlikely these days, you are welcome to go in. She doesn’t have the authority to tell you that you simply can’t come back.”