It’s the most wonderful time of the year. No, we’re not talking about Christmas or New Year’s. We’re talking about March Madness. Once again, the NCAA Men’s Basketball Tournament is HERE! And once again, Goldberg Jones is running our annual March Madness Bracket Challenge. This year, the champ walks away with a $250 Amazon gift card!

Want to get in on the March Madness action?  Fill out a bracket, and, since you’ve obviously seen every game and broken down every statistic, watch as your team runs the table to the Final Four! Or maybe makes you regret that this year you picked a 16 seed to topple a number one. It always seems like such a good idea. It has to happen eventually, right?

One caveat: In order to win, you MUST leave an email address visible to the bracket administrator. We ran into a roadblock a few years ago where we couldn’t contact our winner. We live, we learn. Also, we promise we won’t use it for any other purpose. This is about having a good time and lording your victory over your buddies, not collecting email addresses. 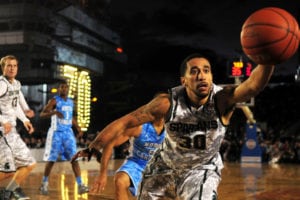 How The NCAA Tournament Works

For the uninitiated, here’s how the NCAA Tournament works. The top 64 teams in the land (it’s actually 68, as the “first four” games happen earlier in the week) are broken into four regions: North, South, East, and West. Within each region, teams are seeded from one through 16. The lowest seeds play the highest. For example, one plays 16, two plays 15, and so on until eight versus nine.

Each round has a fun alliterative nickname, like the Sweet Sixteen, Elite Eight, and Final Four. To win the national championship, a team must win six consecutive games.

Filling out an NCAA Tournament bracket is practically an American tradition. It’s also fun, easy, and you don’t even need to be a fan. Our yearly office pool is usually won by someone who has no idea what they’re doing and makes every choice based on uniform color or which mascot would win in a street fight.

So, sign up for the 2018 Goldberg Jones March Madness Bracket Challenge. And make sure to follow us on Facebook and Twitter for regular updates. We spend a lot of time obsessing over rim-rocking dunks and nail-biting buzzer-beaters.